PaddleNSW slalom icon Jessica Fox has joined the greats of NSW sport being recently named NSW Athlete of the Year for a second time at the NSW Champions of Sport Ceremony at Rosehill Gardens.

Jess enjoyed an outstanding year winning a total of 13 individual medals and three team medals in the women’s C1 and K1 events at the 2017 World Cups and World Championships – completing the year with the World Champion title in the K1 Slalom.

Humbled and deeply honoured when accepting the award, Jess reflected on the power and growth of women’s sport in NSW where six out of the seven finalists were outstanding female athletes of the highest calibre.

Jess previously won the same State Award in 2013, having won the Junior Athlete of the Year in 2012.

At the same prestigious NSW Champions of Sport Ceremony, our international sprint official and hard-working PNSW Sprint Chair Laura White was a finalist in the 2017 NSW Official of the Year category, whilst PNSW CEO Peter Tate was a finalist in the Administrator of the Year category. A wonderful night bringing the sport of paddling to the forefront of the sporting industry. 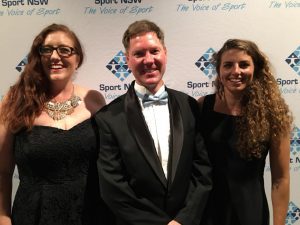