Race report – from Trevor Nichols
The first harbour series race of the year was hosted by Brisbane Water Paddlers on a new course starting at the Saratoga Sailing Club. This is just a short distance from the more familiar Davistown, and the move was made to improve the event with fewer channels to contend with. Brisbane Water Paddlers is a relatively new club with 35 members so putting on such an event is a top effort and much appreciated. After having well over 100 entries last year this years’ 67 registrations was a tad disappointing. Perhaps recent weather events and the potential for a lot of debris in the water from heavy rain came into play? Or was it that some regulars were still shell shocked from the previous weekends Makai Cup race in Ulladulla which by all accounts was intense and resulted in several broken skis?

As for the event itself, we had perfect conditions making it feel like a marathon series race due to the lack of wind and almost zero wake. I heard more than one paddler wishing they had bought their K1 during the warm up. It was great to have 15 Lane Cove paddlers in the event including Brett Greenwood and James Harrington who we are more used to seeing in Manly colours. 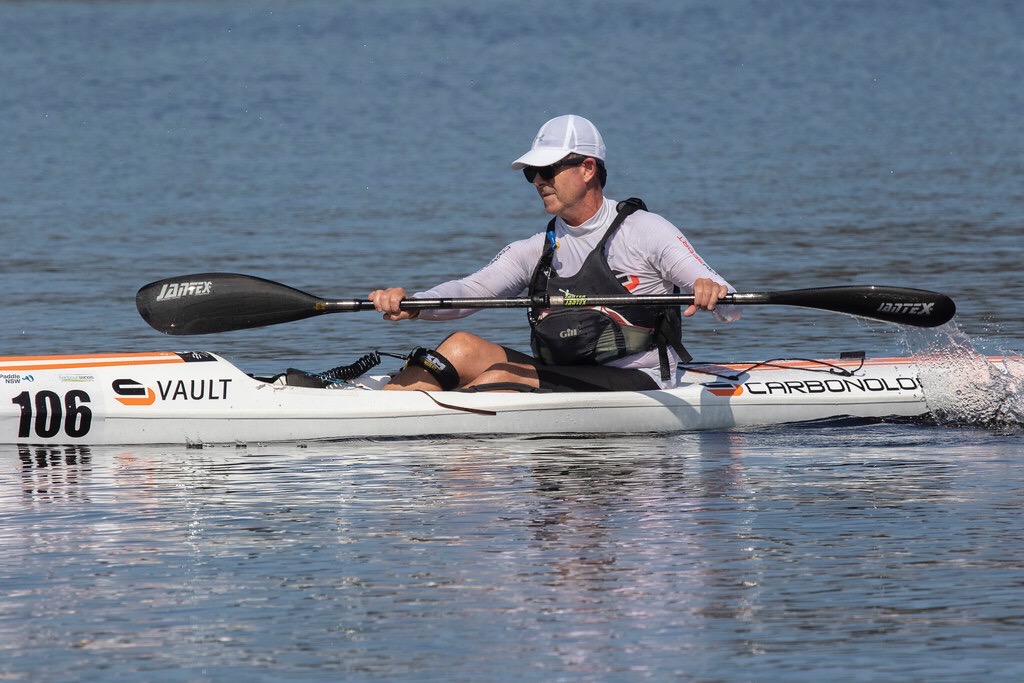 Above: Jeff Collins with mandatory leg leash in the rough conditions

The 8am briefing was bang on time, with Tony Hystek explaining the start procedure for doubles, followed by the 15km starters then the 10km event. Craig Dodd ran over the course, which was star shaped to get the distance in the harbour. I was one of those who did not pay as much attention to the course briefing as I should have thinking “well Brett and the fast paddlers are listening and looking at the map so I will just follow them”. My novice error was that on a star shaped course the fast paddlers are quickly out of sight and I was left to think feck do we also have go around that buoy or is it a simple harbour mooring buoy. My GPS track of just under 14.5km showed that I, along with the 4 boats I was chasing around the course, did miss a buoy somewhere. My favourite part of the day was arriving at the finish with Phil Geddes and asking how he enjoyed the 10km course to be told “no I also did the 15km but missed a turn or two“. 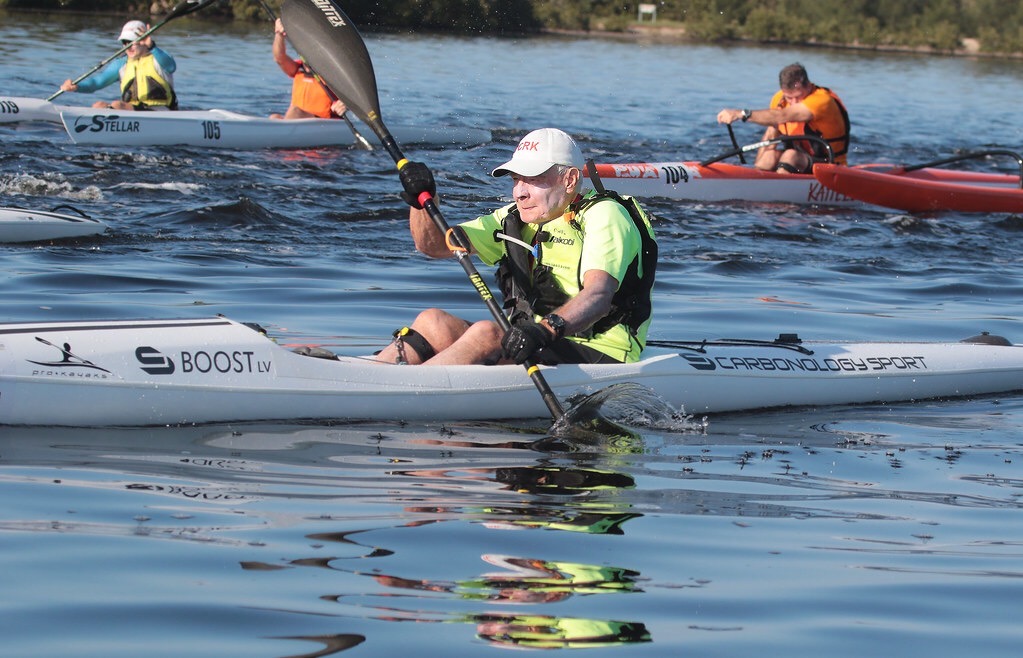 Above: Phil Geddes at the 15km start

Well done to Matt and Liberty Blundell getting in more race experience this time in an Epic V8 double – I am told by a friend these are brilliant boats. We had Brett win the long course singles and Tony & Alana the doubles. BWP have their marathon series race on 31 May which is hopefully better attended as these events have a positive impact on smaller clubs in particular. I really enjoyed the event and appreciated the earlier start than the marathon series and look forward to doing a few more hopefully with a bit of swell to contend with.

As the dawn broke on Saturday 25th May 2019 a dedicated squad of volunteers and sponsors could be seen erecting a little village of marquees for registration, paddling accessories and sparkling new skis for sale, ready for the steady flow of competitors arriving in keen anticipation of a great event which was about to unfold. Tony Hystek and Maya Gibson could be seen setting up the rego while Pat Langley was setting up the Vaikobi stand and Jill and Brett Greenwood were putting up the Carbonology and Vajda displays. A picture of energy!

Helen Morrow of Paddlecraft, the event director, welcomed the paddlers and Tony Hystek gave his usual stern warnings about fair play and not breaking the start.

The start was in the channel opposite Haystack Point. The course was clockwise across to the South of Scotland Island keeping outside all the moored boats. Skis took a course close to the boats all the way round the island and the conditions and chop changed slightly as you went around. Long course did a lap completely around Scotland Island first and then headed North to Woody Point and then on to Longnose Point. At each of those was the pink PaddleNSW cones. Then there was the long run back to Rowland Reserve with the breeze behind and some boat washes to contend with. The finish was between the two Carbonology banners on the beach at Rowland reserve. The short course was the same except the was no first lap around Scotland Island. A picturesque, different course and it was good to see a wide range of paddlers from the grizzly old regulars like Paddlepop Gillet and Gazza Gilchrist to plenty of keen newcomers. Apparently there were still opportunities to get lost and take the wrong course!

Long course doubles were first off and soon got into a cluster of 4 doubles, James Pralija and Matt Windon, Mario and Nikki Veseley, Cam Middleton and Tracy Wilson, Fiona Rae and Grant Kretzman and they eventually came in in that order. James and Matt came in second overall in a time of 1 hour 3 minutes and 53 seconds, 31 seconds behind the Overall winner, Luke Eltham.

The next start was the long course singles. The paddlers soon settled into clusters.

At the elite singles level Dave Coward noted that there were about 6 in the leading cluster and in the melee paddlers were getting spat out of the group every so often and left behind. That group was Luke Eltham, Brett Greenwood, Jamie McCrudden, Dave Coward, Paul Stone and Matt Rees. Luke managed to get away from the fleet by less than a minute and there was only a little over 2 minutes between the first 4 home.

There was a great competition in the women’s 19 – 39 ski class with Georgia Sinclair coming in 7 seconds ahead of Carla Papac with Montannah Murray only another 10 seconds behind that. All three came in in a very creditable 1 hour and 12 minutes.

We have to take note of the performances of the very young and the very old! There were 7 paddlers in the over 60s skis, led by Gary Hancock back at his best in 1 hr 12 minutes and 22 seconds, ahead of Peter Grimes and the irrepressible Paddlepop Gillett on the virtual podium. At the other end of the spectrum in the under 18 skis was Fletcher Armstrong in an amazing time of 1hr 9 minutes and 20 seconds over Ben Rees, Ashby Allen and Ziko Veseley.

There was a single start for all short course paddlers. Jana Osvald, who went on to do a time of 1 hour 16 minutes in the women’s surfski 50+ says the start was orderly and smooth. She said it was a lovely day for a race and she was intrigued at the number of jelly fish she kept on hitting with her paddle. She was pleased to be definitely not last. She was quicker than 3 others! Well done Jana.

First across the line in the short course was James Haigh in the surfski 19-39 in a very creditable time of 51 minutes 54 seconds, almost two minutes ahead of Isaac and Peter Moran in second place in a surfski double with Freya Alston, in the Open surfski 19-39 coming in third.

Mike Lieberman who came in 4th out of 9 in the short course surfski men’s 50+ noted that quite a few short course paddlers, including himself, went for a swim because they were disturbed by the unexpected Westerly gusts and boatwashes.

Scott Powell, who came in 10th overall in the surfski men’s 50+ was just rounding the pink buoy at Woody Point when a combination of wind and boat wash unexpectedly tipped him in! He got himself safely back into the ski and shortly after, a girl also doing the short course paddled past him and asked him “Can you tell me where Scotland Island is?”  I’m sure she has benefitted from navigating this race! We can all reflect that you can’t take anything for granted as you gain experience in the Harbourseries.

Mike is managing the forthcoming “Stroke the Lion” event and suggests that paddlers use the time between now and then to hone their open water skills because the long course will be around Lion Island. “Stroke the Lion” will test our skills

Thanks to the Race hosts Paddlecraft, to the Open Water Committee of PaddleNSW and to the sponsors:

See you all at the Hacking Classic on the 15th June. 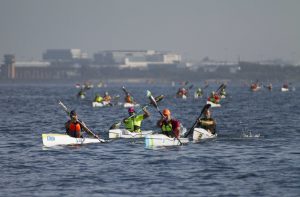 The Dolls Point Kayak Club hosted their popular event again this year with 120 paddlers registered and 110 on the water. The weather was calm with light NW with expectations of increasing to 15Kn north. The morning started chilly as we all entered onto the well-located parking area for chat and prep.

Following the well organised registration some took to the water for a warm up and inspection of the much anticipated first turning marker with Jezza noting strong incoming tide. The well organised race briefing followed at 8am with the 10Klm short course turning can at Novatel whilst the 14Klm Long course turning 90 degree at entrance to Cooks river heading east along runway then turning 90 degree again for the straight run home.

Three starts were had with Long course doubles leading off followed by long course singles and lastly short course. Tony Hystek voice was a feature at the start successfully containing the line jumpers. With the doubles away the single long course contenders started in a flurry with Tony Haines noting he hit 20Klm off standing start, so the pace was on! The participants in all three starts settled well into their groups with wash riding and turning buoy tactics much considered during the long straight-line hauls.

Many thanks to all the organisers for hosting what is a great event on a lovely patch of water, well all be back next year! 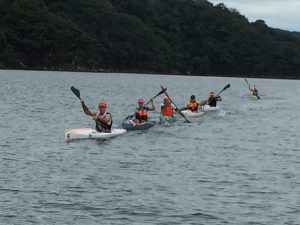 Pittwater Classic : Andrean Duffy reports…
Under wet a dreary skies, the 2019 Harbour Series kicked off with the Pittwater Challenge from Bayview on Sydney’s Northern Beaches
The rain didn’t impact the turnout or the enthusiasm however, with 110 paddlers heading out for the 8km short and 14km long course.
The rain eased and paddling conditions were favourable for a safe and fast race, with little wind and chop out on Pittwater. The local jellyfish population were out in force forming the bulk of the spectatorr crowd!. Paddlers were hopeful for a forecast northerly wind to help on the return leg, but it didn’t eventuate until much later in the day. The winning long course double crew of Byron Chadwick and Tinus Koekemoer brought home line honours in a fast 1.03.17, and Luke Elman was the first soloski paddler over the line in 1.03.39, followed by Cade Barnes and Jamie McRudden. Young kayak superstar Nicci Vesely won the female long course in 1.15.48, followed by Danielle McMahon and Caroline Marschner. The winning short course double crews of Colin Biggin and Luke Hayes brought line honours in 45.51 followed by by Ian Heath John Nicotra, then Isaac and Peter Moran. James Haigh was the first solo ski paddler over the line in 50.27 followed by Riaan Bredell then another young Vesely, Ziko. Michele Parker won the female short course in 58.17 followed by Joy Robinson then Leisa Aitken. Short course mixed doubles was one by Lee Anne Andersen and Nigel Carson followed by young Liberty with dad Matt  Blundell. The Series moves to the other end of Sydney on Saturday 6th, with #2 race taking place at Dolls Point. We look forward to another good turnout and an exciting race season ahead.