Home Uncategorized Guinness World Record
Facebook
Twitter
Google+
Pinterest
WhatsApp
A husband and wife team, Jez and Claire, have recently completed a Guinness World Record for the most amount of tandem kayak rolls in under a minute.
Claire, who is the most successful female freestyle Kayaker in history with ten world Championship titles under her belt teamed up with her husband, Jez who has won over 10 national championships and three World Cup‘s in freestyle kayaking at the Cabarita pools in Sydney.  The two were contacted by a BBC program called  officially amazing which showcases world records in a very kid friendly way. Jez represents Australia however Claire kayaks for England and the two have been paddling around the world together for years.
The previous record of 26 rolls was extremely hard feat to complete. Jez and Claire practiced for months ahead of the attempt however never quite got to the magic number as it is quite a difficult achievement. Their first attempt with all the cameras around failed just short of the world record getting 25 as Jez’s nose plugs came off midway through the attempt seeing him splatter water as he gasped for air afterwards. However they bounced back in their second attempt to equal the 26 roll record.
‘It was so fantastic getting the record, I actually couldn’t believe it when we found out we got it,’ Jez said.
Claire traveled to England to try to set the Guinness world record for the most amount of front loops thrown in a kayak in under a minute. ‘You are just gonna have to watch the TV program to see if I got it,’ Claire mentioned.
The program has been aired on BBC worldwide. 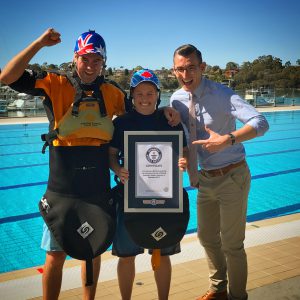