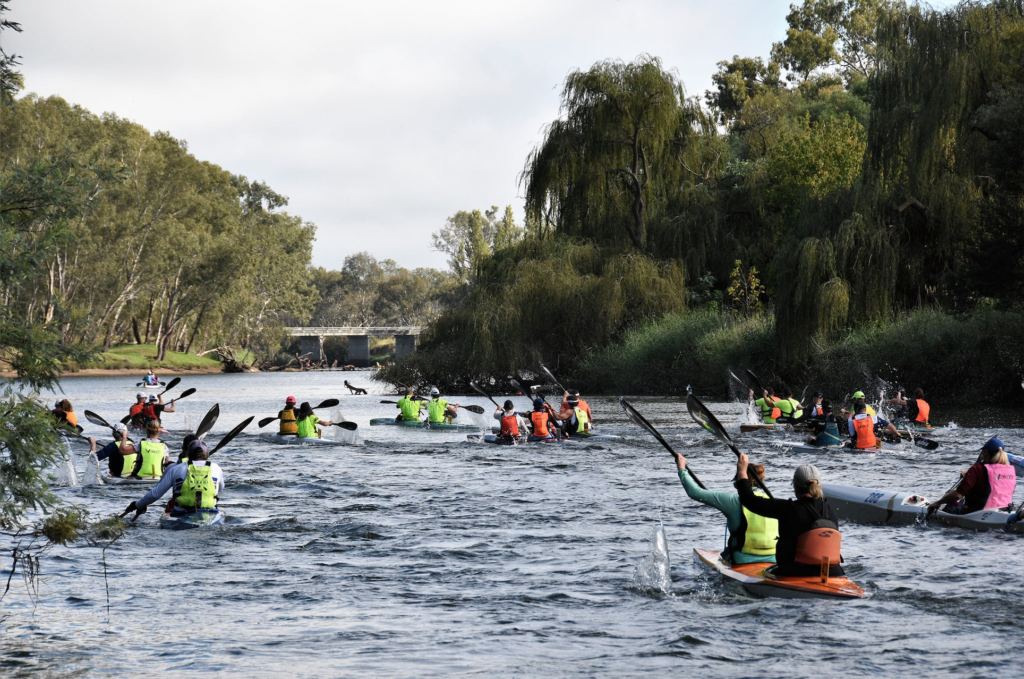 Snaking along the border between New South Wales and Victoria, then on to South Australia, the Murray River is one of Australians most iconic paddling spots.

The annual Frank Harrison Memorial Race, hosted by Mitta Mitta Canoe Club, invites paddlers explore the river from weir of the Hume Dam to Albury, a portion of the river that is perhaps not so well-known to padders familiar with the Murray Marathon. With the initial 2021 Frank Harrison cancelled due to a snap COVID lockdown in Victoria, a no-go for Marathon Nationals offered the ideal weekend for the border race to take place in the final weekend of March. Paddle Victoria invited all who could travel, instigating an interstate trophy to the state that could collect the most points across two days of racing. Along with 48 paddlers from NSW and 67 from Victoria, eight paddlers from South Australia made the somewhat longer trek east to support the race.

Afternoon singles races on Saturday meant that those who wanted to make a mad dash down from Sydney could do so easily. With boats for the 26km race beginning to assemble on the bank in full view of the iconic Weir Wall, the main topic of conversation seemed to be how little water there was in the river – recent flooding in NSW had done little for the water levels down south!

Off down the river, and this was a very different playing field to the wider expanses of Murray further downstream towards Swan Hill. Round one corner, and there would be a clear, deep channel with minimum swirl, while round the next we met eddies galore and dense beds of river weed. Mid-river islands kept us on our toes, accelerating water and boats alike, and a few of the Victorian boats with trailing rudders looked like they might just have made the right decision.

With 84 boats across the 26km and 16kms distances, along with a healthy contingent of single-blade paddlers from VIC, there was a wonderful sense of camaraderie out on the water. Under the freeway bridge, round a final bend and the river serenity melted into the colour and noise of spectators and the finish line. Placings across several divisions were hotly contested, and at the end of day one it looked like NSW might just be holding their ground points-wise with the host state. Pizza at the local open-air woodfired oven rounded off the day, with plenty of early nights on the agenda.

Day two, and it was time for the doubles. 45 boats took to the water across the same two distances, with mass starts in the 26km Weir Wall race testing the nerve of more than a few boats. While our memories of the course from the previous day might not have been perfect, two is certainly more fun in the boat. Crews flew down the river, taking full advantage of any fast water they could find and hoping to stay well clear of weed beds. NSW paddlers again posted impressive results, with the tussle for line honours in division 1 resulting in a mere five second over 26kms and several impressive women’s and mixed crews in the overall mix.

While NSW were a force to be reckoned with in K-boat classes, Victoria’s strong contingent of single-blade paddlers secured them the win in the interstate cup. The race was a fantastic initiative on the part of Mitta Mitta Canoe Club and Paddle Victoria, and NSW will be back for the challenge in 2022.

Find out more about the history of the Frank Harrison Races

A Milestone Race on Bonville Creek