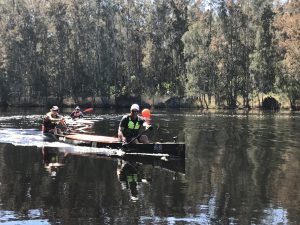 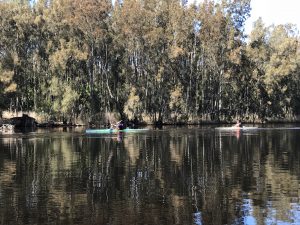 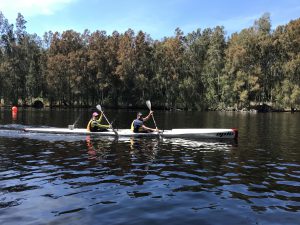 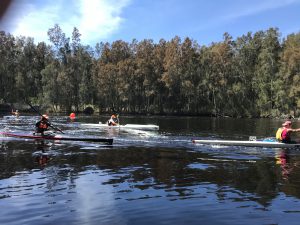 Credit to Naomi Johnson from LCRK for these writeups! Pics above by Maya Gibson  stationed on an IRB at the top turn of the Myall Classic. It was good to see the awesome smiles from these paddlers who had already done 23.5kms (and need to the same for the way back)!

Drive through Gosford, hang a right and you’ll arrive in picturesque Davistown on Brisbane Waters. Spring had finally arrived, with the forecast even looking hot, and paddlers were in high spirits about the penultimate race on the marathon calendar. Though the sun was certainly out, gusting winds and a proliferation of speed boats made for one of the most challenging races of the season so far.

With multiple turns and plenty of decoy buoys thrown into the mix, the course looked at tad confusing from the bank. The general consensus was to just follow the person in front, and watch out for the ferry of course!

No sooner, though, had we all bundled out onto the water than the wind started up in earnest. One minute glassy and inviting, suddenly the course was covered in large ripples and even some small waves. Only one swimmer was reported on the start line, but things only got tougher with the realisation that there were going to be a lot of power boats sharing the course. Some were kind, slowing down and taking a wide berth, while others zipped through and churned everything up.

Despite the tough conditions most paddlers finished with a smile on their face (Pete M?), happy to have survived the heat, wind and waves.  Thanks to Lesley Manley and Ian for their great photographs, and to Brisbane Waters for hosting the event.

Tucked away north of Newcastle is the idyllic Myall River, winding north from Tea Gardens into what feels like the middle of nowhere. For some, it’s a fast and furious race for the line, for others a gentle paddling getaway, and for many a test of whether this year’s Hawkesbury might be on the cards. With 47km, 27km and 12km distances on offer, it’s a race for all goals and abilities, and there’s a fabulous atmosphere.

Saturday 22nd dawned bright, clear and warm, with spring arriving somewhat unexpectedly overnight. Whether to wear long or short sleeves seemed to be the question of the morning, and all had an eye on the volatile Myall tide. Would it turn during the race? If so, when?

From Tea Gardens, the course heads upstream, across the blustery Broadwater and into the more enclosed part of the river proper. For the first few kilometres there are houses and campsites to be seen along the banks, which then stop abruptly. Up at Eagle’s Reach, both the 13km checkpoint and 27km course turn-buoy, the lone jetty feels almost out of place on the otherwise deserted riverbank. The odd cabin here, another jetty there, the channel markers across Brasswater, there isn’t much more to indicate human habitation.

For those doing both the 47km and 27km courses it was a hard slog up to the top turn, and everyone was much happier coming back down the other side. Wash ride or not, as least the boats were now pointing in the direction of the finish line!

Of course, 47kms isn’t for everyone, and the 27km and 12km courses were also strongly contested. With a massive list of some 27 paddlers contesting the 27km Masters 50+ race, a great spread of boats across all the other classes, and of course a host of students, there was still plenty going on after the 9am start. It’s great to have a race on the calendar that offers paddlers such a variety of distances and challenges!

“The future of the Myall is looking rosy, as we try to improve the event each year and involve more locals. The major problem however, is the shortage of volunteers. Without the huge contribution of Lane Cove paddlers and families, we would not have had an event to run, and PNSW is very grateful to all who contributed. Nigel Weeks, a local paddler from Bulahdelah, also worked like a Trojan all day, one of the unsung heroes who gets things done in the background. He just phoned me one day a few years back offering his services, and has been coming ever since.

This is a very special event, and one that will continue to grow and improve if we can find enough volunteers.” – Tony Hystek

Good luck to all the crews competing in the Hawkesbury Canoe Classic and Wisemans Dash, 27th and 28th October. Thanks in advance to all the land crews, volunteers and organisers without whom there is no race.

The Presentation Night will be held on Saturday, 10th November at the Mooney Mooney Club: https://www.trybooking.com/YZSF

Return to Marathon and the Ultramarathon Series