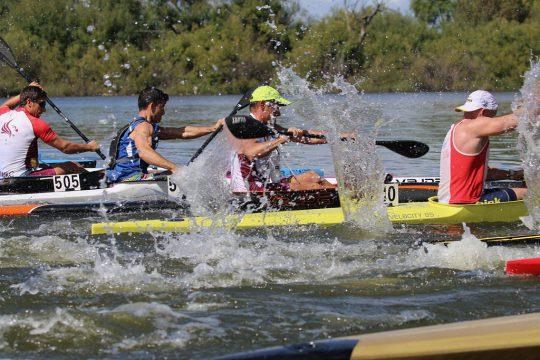 With January and February to hone skills in a K1, do a spot of cross-training in ocean races or just enjoy the summer sun, it was back into the thick of it at the beginning of March. On Saturday 2nd, the NSW State Singles Championships were held in Canberra, hosted by Burley Griffin Canoe Club. There was a strong turnout of more than 170 paddlers in 150 boats, with a slightly altered format allowing paddlers to choose either age-based state titles races or non-competitive classes over their regular marathon distance. Many of the ICF ‘Selection’ classes required paddlers to portage – complete a section of the course running along the bank carrying their boat – and while the competitors themselves might dread the run it added plenty of excitement for the spectators.

Racing was heated in many classes, particularly the Open Men’s K1 won by Brett Greenwood of Manly Warringah and the whopping 11-paddler Men’s 50-54 Non-Portage K1/Ski division won by Michael McKeogh of Wollongong Paddlers. It was great to see a solid group of juniors out on the water too, with Joseph Burton (U/18 K1), Emily O’Rourke (U/18 K1), Annabella Dorsman (U/16 K1), Guy Robinson (U/14 K1) and Carl Vandergraaf (U/16 Rec) each winning their respective age divisions.

For those who didn’t quite feel they had padded far enough at States (this is marathon, after all!), BGCC hosted the annual Burley Bash on Sunday 3rd. Paddlers could choose between 30km, 15km, 5km or 3km courses that took in Lake Burley Griffin before the day got too warm. The long 30km race was won by BGCC local Trent Birkett, while young hot-shot Michael Hanemaayer took out the 15km distance.

Round 2 of the marathon series was back to regular divisional racing, as paddlers descended on Woronora River in Sutherland for another hot day of racing on March 23rd. Hosted by Sutherland Shire Canoe Club, and one of the best-attended marathon races on the calendar, the day saw 143 boats competing across the 13 divisions. Wash from speed boats sharing the river made for challenging racing, especially for those still finding their K1 legs, however a strong high tide helped secure some fast times across the board.

A quick turn-around and racing was back on for Round 3 only the next weekend. To finish off the month, Central Coat Paddlers hosted the round at Tacoma on the Wyong River on Sunday 31st. Finally, the day wasn’t looking as warm, with a distinct chill in the morning air as paddlers arrived to see a strong outgoing tide. Less wash and a bit more wind made for a totally different day of racing with very few divisions looking the same as they had only eight days before!

Many marathon paddlers are currently busy preparing for the Australian Canoe Marathon National Championships, which will take place in Perth this May. A strong NSW team is shaping up, with 35+ paddlers aged between 10 and 80.

Thank you to the three clubs who have hosted races so far. We’re looking forward to plenty more great racing in the coming months!

Get Ready for the Burley Griffin 24hr Paddle Challenge!